The Book of Jonah is read in the Synagogue during the afternoon service of Yom Kippur, the Day of Atonement, as it emphasizes God’s forgiveness after genuine repentance.

This book tells the story of Jonah, son of Amittai, a prophet in Israel, who is commanded by God to go to Nineveh and address the wickedness of the people. He tries to escape the divine command by boarding a ship to Tarshish and God sends a great storm that threatens to drown the ship. Jonah confesses to being the cause of God’s wrath and the captain and crew, full of regret, throw him overboard with the hope of appeasing God and soothing the sea. Jonah is then swallowed by a great fish and spends three days and three nights praying in the fish’s belly.

Jonah is spewed on dry land and God again orders him to go to Nineveh. The people of Nineveh believe in Jonah’s warnings, declare a fast and repent. As God renounces the punishment he planned, Jonah is greatly displeased. He goes to the desert and wishes to die but God causes a recinus plant to grow unexpectedly and give Jonah shade. When the plant withers and dies God tells the exasperated Jonah: “You had pity about the plant, which you did not work for and which you did not grow,…and Should I not have pity of Nineveh, that great city?.... Jonah 4. 10-11 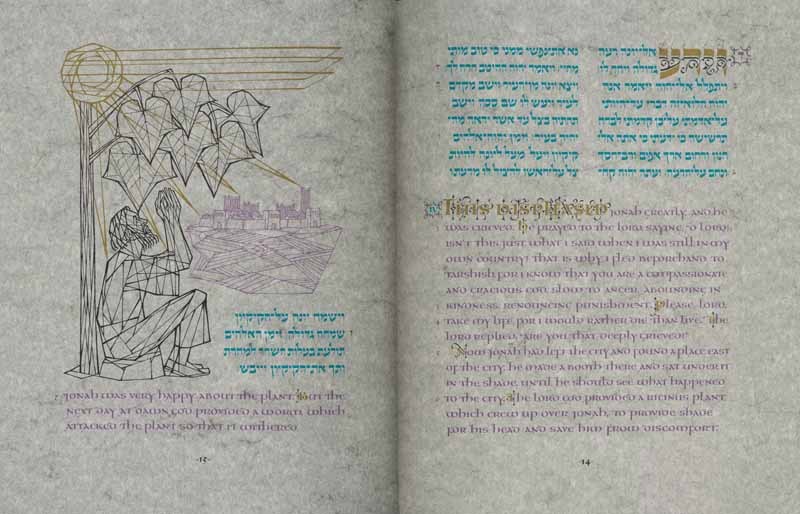 The Book of Jonah

The Book of Jonah
Illustrated by Ismar David,
Southbury, Conn.: Chiswick Book Shop, 1991
Image: Jonah in the shade of the ricinus plant

Ismar David 1910 – 1996
Graphic designer, illustrator and calligrapher. David was born in Germany and studied in Berlin. He lived in Jerusalem from 1932 until 1952 and then moved to New York. David is best known for the conception and development of the innovative David Hebrew type and for the unique linear style of his illustrations. For more information about Ismar David, visit Rochester Institute of Technology webiste: https://www.rit.edu/carycollection/ 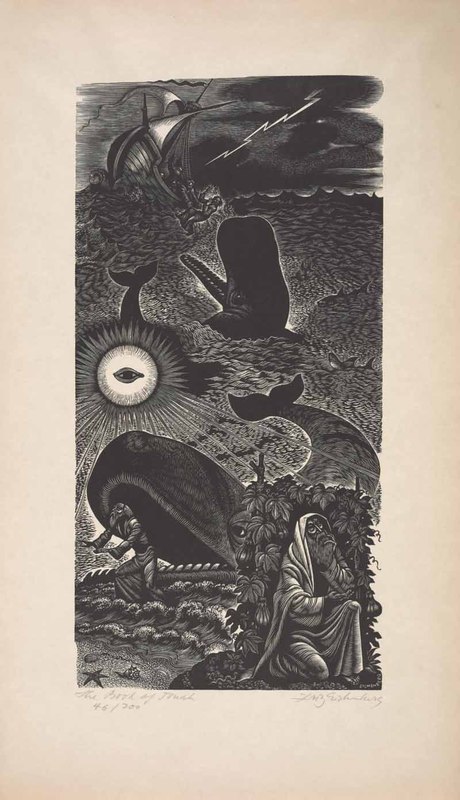 Ten Wood Engravings for the Old Testament,
By Fritz Eichenberg
[New York? 1955?],
Wood Engraving from a series of 200

Fritz Eichenberg 1901-1990
Artist, printmaker, teacher and social activist. Born in Germany Eichenberg immigrated to the United States in 1933. He taught at The New School and Pratt Institute in New York, and at the University of Rhode Island. Eichenberg was a master of wood engraving. He was best known for his illustrations of literary classics and for the pacifist newspaper The Catholic Worker. 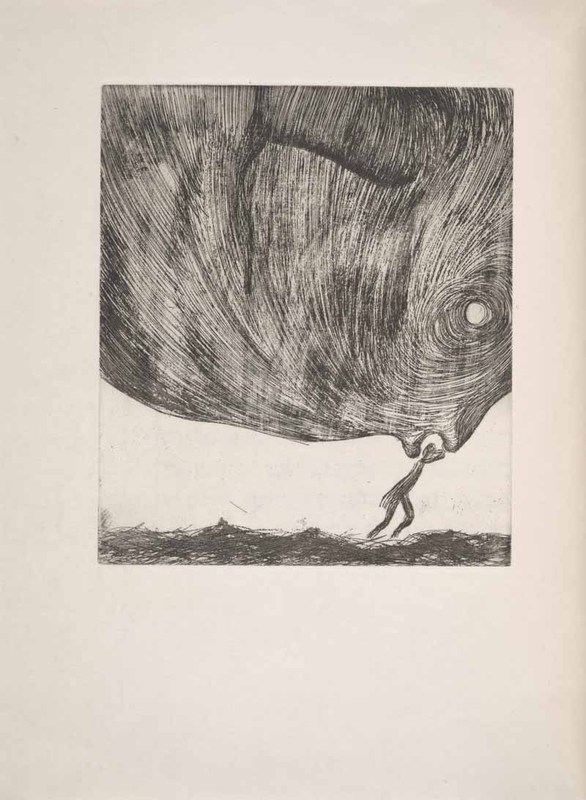 Etchings completed at the Jerusalem Print Workshop, Letterpress completed on an Albion Hand Press and calligraphy scripted by David Moss
Image: “The word of the Lord came to Jonah son of Amittai: Go at once to Nineveh, that great city, and proclaim judgment upon it; for their wickedness has come before me” Jonah 1.1-2

Mordechai Beck
Artist, writer and Journalist. Beck was born in England and immigrated to Israel in 1973. In his art he uses various techniques such as drawing, printing and etching. For more information about his work conact Mordechai Beck <marduk@bezeqint.net>

← Queen Of Sheba
Jeremiah →
From the Prophets
Jonah