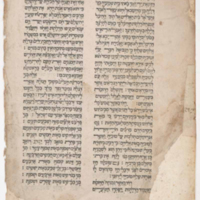 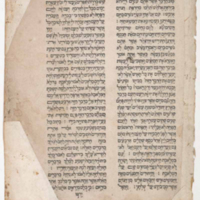 Biblia Hebraica.  Naples.  ca.  1492
A leaf, printed on both sides from the second Bible printed in Hebrew by Joshua Solomon of Soncino.
Contains:  Nahemiah, chapter 5:8 through chapter 7:16

In the year 538 B.C.E., Cyrus, King of Persia, made a declaration that allowed Jewish exiles in Babylon, which became part of the Persian Empire, to return to Jerusalem and rebuild the temple there. When Nehemiah, an attendant in the court of the Persian King, received word on the worsening conditions of the Jews in Palestine, he obtained permission to go there as a governor (445 B.C.). Nehemiah supervised the building of the walls of Jerusalem, encouraged more Jews to settle in the city, and led important social and religious reforms.

The book was known as the book of Ezra or the book of Ezra-Nehemiah and was separated into two distinct volumes only in the 16th century. The exhibited page was printed in 1492, therefore the name Ezra appears at the top of the page.

← Esther
From the Writings
Nehemiah