At the heart of the suffrage movement in the United States were the unique battles fought in each state or region. In the Northeast and mid-Atlantic, where the suffrage movement began, suffragists held conventions, parades, protests, and other public gatherings to establish and define the cause. In the South there was concern about the implications of women’s suffrage for racial political and social dynamics—an issue labeled the “Negro Problem”—as most white pro- and anti-suffragists wanted to maintain “white supremacy.” Midwestern suffragists focused their demand for the vote on civic responsibility, asserting claims to citizenship based on their active contributions to community building in the form of libraries, schools, churches, and other institutions. The items in this section illustrate the different contexts of the suffrage movement within each region. 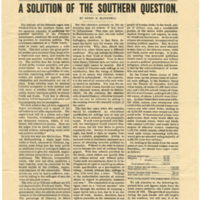 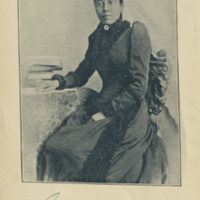 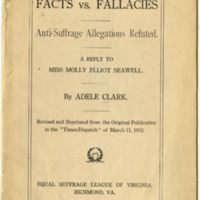 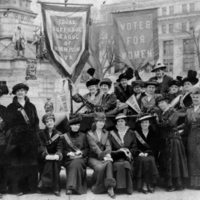 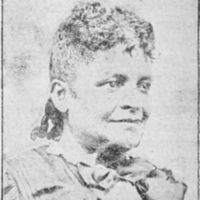 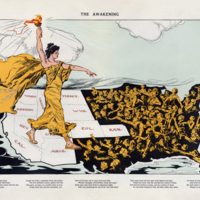 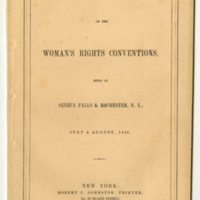 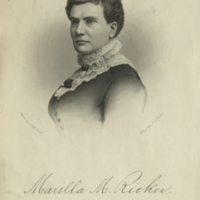 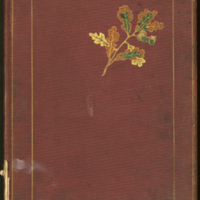 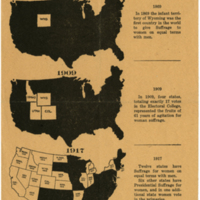 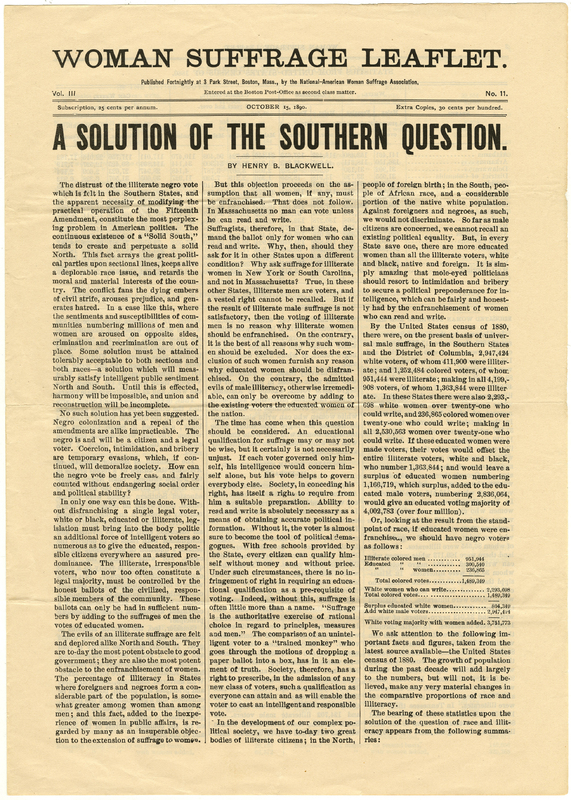 Henry B. Blackwell—abolitionist, co-founder of the American Woman Suffrage Association, and the spouse of prominent suffragist Lucy Stone—utilizes the population demographics of the Southern states to argue that if “educated white women” were given the right to vote, their votes would exceed those of “colored” male citizens. Racist and classist arguments for statistical dominance and qualified suffrage were used by white suffragists to promote the cause in the South. 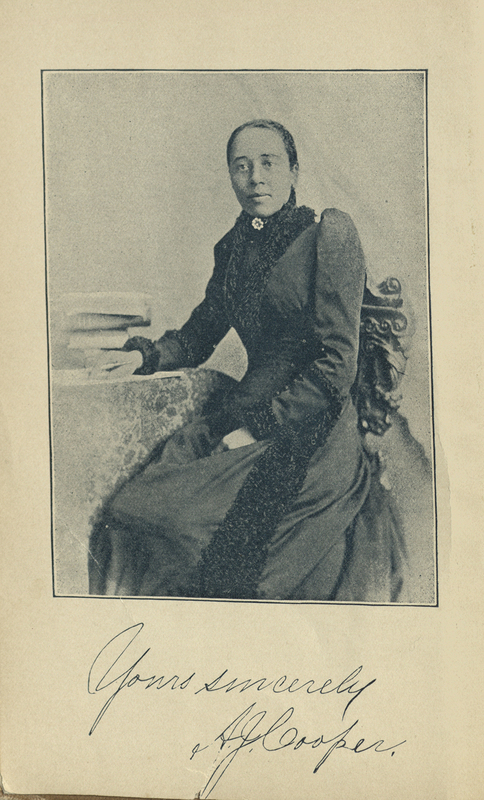 “The cause of freedom is not the cause of a race or a sect, a party or a class,--it is the cause of human kind, the very birthright of humanity.”

from A voice from the South 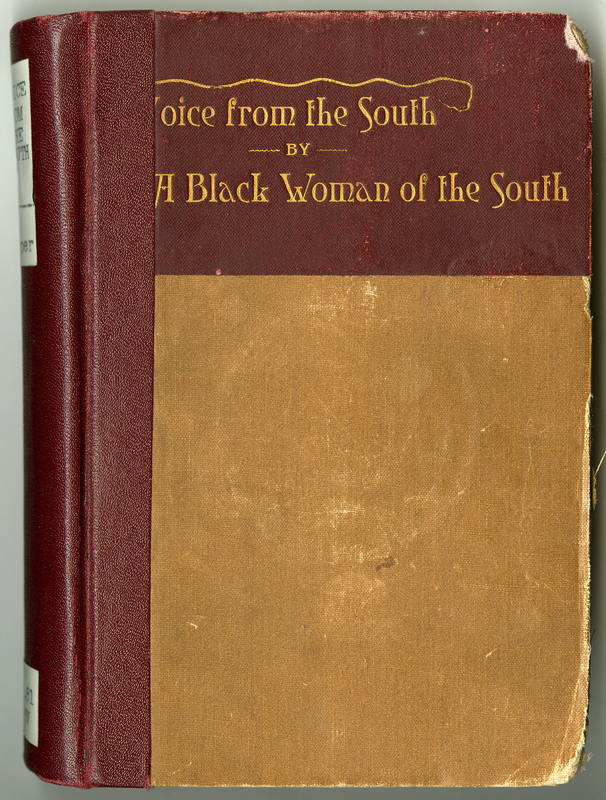 A Voice From the South

Anna Julia Cooper’s A Voice From the South “by a Black Woman of the South,” considered to be one of the first published articulations of black feminism, is a collection of essays and speeches about African American women’s rights, education, and status in the late nineteenth century. Using an intersectional lens, Cooper analyzes African American women’s realities facing racism, sexism, economic oppression, and lack of voting rights. Cooper challenges the approach of white women’s movements of arguing for women’s rights at the expense of others, calling for the rights for all humanity. 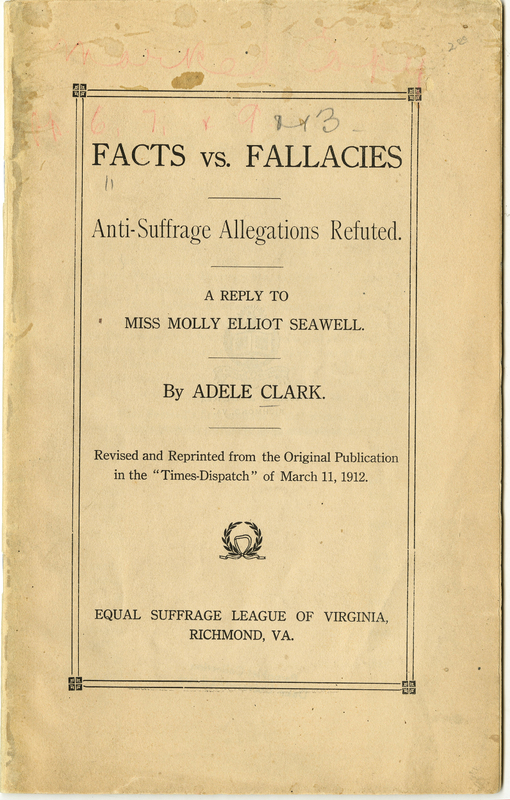 Adele Clark, a prominent artist and founding-member of the Equal Suffrage League of Virginia, worked hard to empower women in Virginia and across the South in the fight for suffrage. In this pamphlet, Clark responds to anti-suffragist author Miss Molly Elliot Seawell’s Why Women Should Not Vote to demystify common misconceptions about marital status, property rights, and social representation in relation to suffrage. 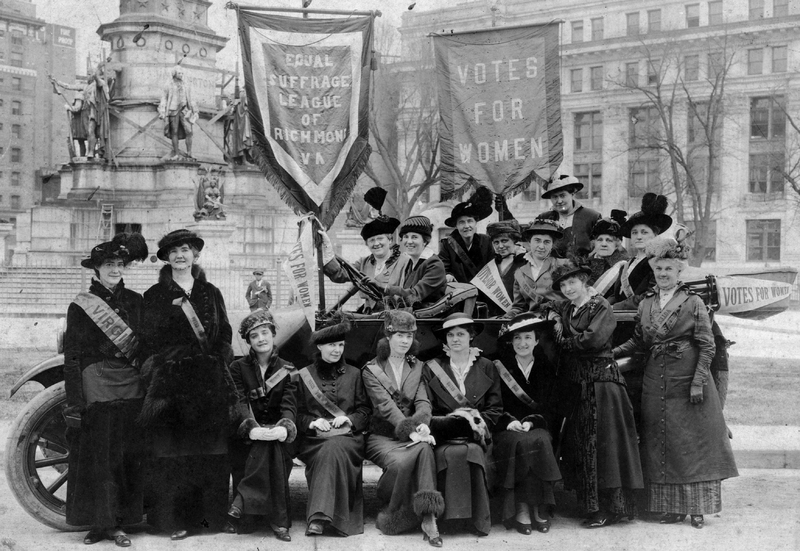 Members of the Equal Suffrage League of Richmond, Virginia 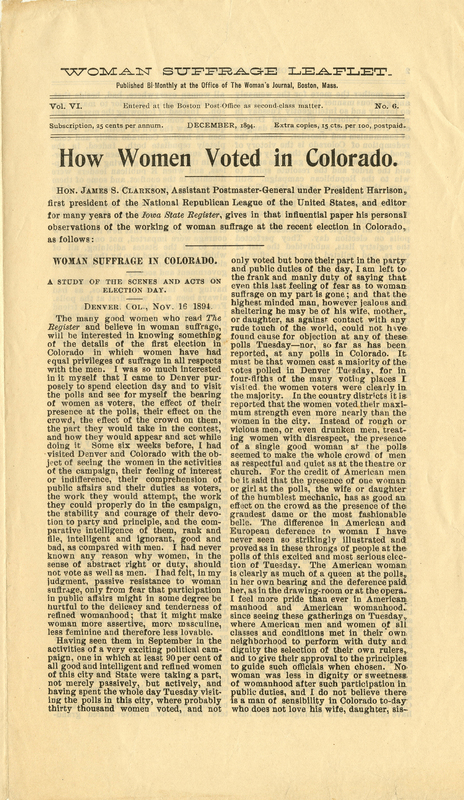 In this leaflet, Hon. James S. Clarkson describes with enthusiasm and even reverance how Colorado women from every social rank “cast a majority of the votes” on election day and “bore their part in the party and public duties of the day” in the first election after women’s suffrage was enacted by state referendum in 1893. Colorado’s success indicated increasing support for women’s suffrage and paved the way for nation-wide women’s suffrage in 1920. 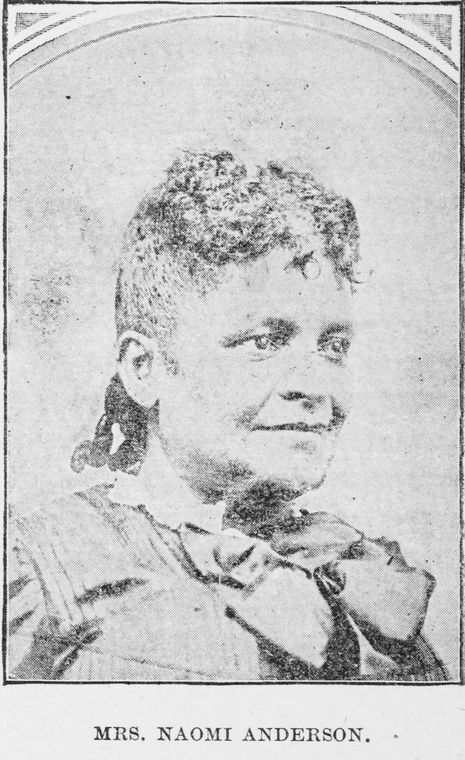 "And, gentlemen, I warn you no longer to stand out in refusing the right for which we contend; in trying to withhold from these noble ladies here and their darker sisters the franchise they now demand. Miss Anthony and Mrs. Stanton, with their high moral and intellectual power, have shaken the states of New England, and the shock is felt here to-day. The echo come back from St. Louis and all through the west; a sensation is aroused in England; and soon the whole world will be awakened to a sense of the value and importance of our cause."

Suffragist, temperance leader, and writer Naomi Bowman Talbert Anderson was born into one of the two African American families in Michigan City, Indiana in 1843. She began speaking about women's suffrage at the Woman's Rights Convention in Chicago in 1869 then continued on a lecturing tour through southern Illinois, Indiana, and Ohio. Anderson wrote articles on suffrage, Christianity, and temperance that were published in newspapers from the Midwest to California and worked alongside white suffragists to campaign for one of the nation's first state woman suffrage referendums in California in the 1890s. Activists Susan B. Anthony and Elizabeth Cady Stanton both praised her contributions to the movement, but did not name her when they published an excerpt from her speech in The Revolution, instead titled the piece “A Colored Woman’s Voice” 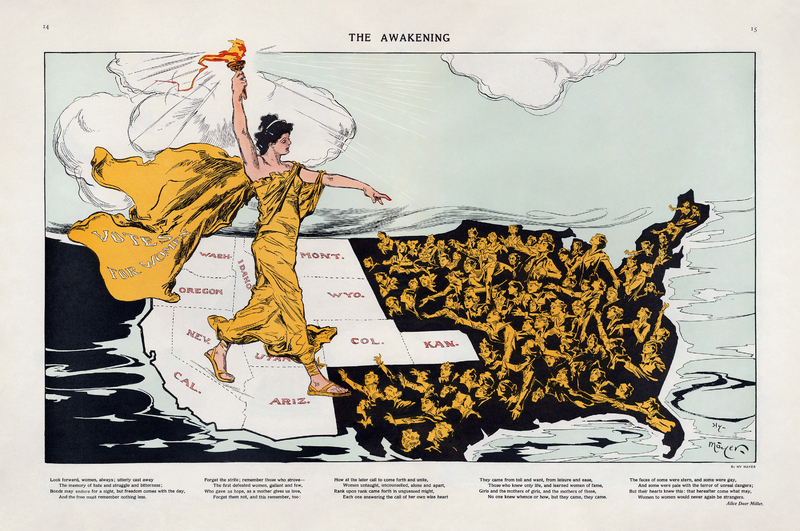 "The Awakening" from Puck, restored image by Henry Mayer 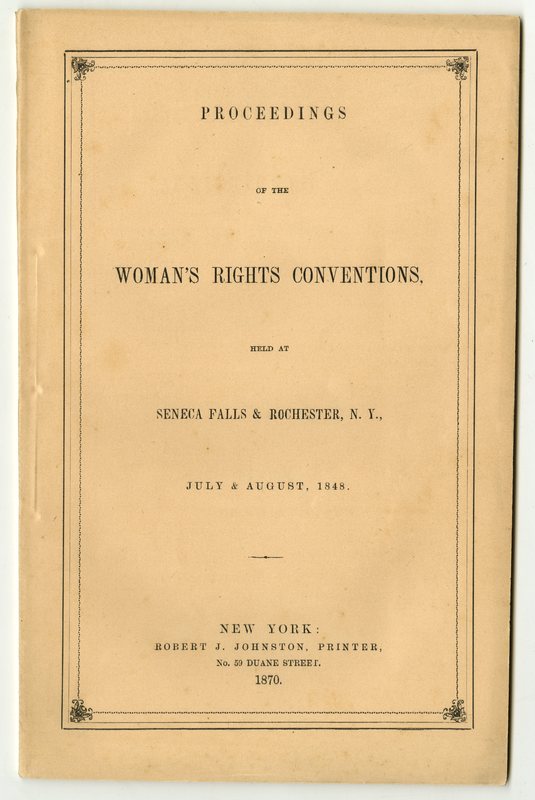 This volume includes a Report of the Woman's Rights Convention held at Seneca Falls, N.Y., July 19-20, 1848, in Rochester, New York, the first of its kind held in the United States. Attracting widespread attention, it was soon followed by other women's rights conventions, including the Rochester Women's Rights Convention in Rochester, New York, two weeks later. Proceedings of that event are also included. 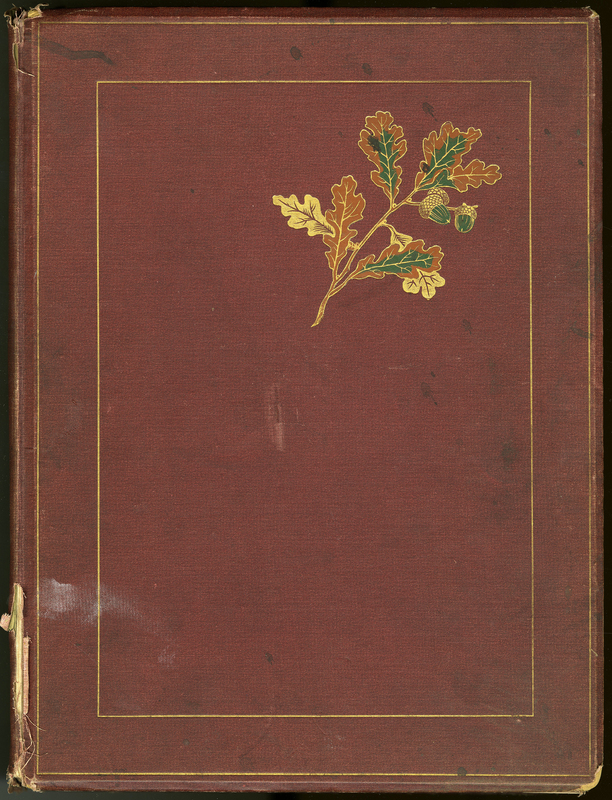 New Hampshire suffragist Marilla M. Ricker was the first female lawyer and the first woman to run for governor in the state. After attending the first National Woman Suffrage Convention in 1869, like many others in the Northeast, Ricker engaged in public protest of women’s disenfranchisement. Her scrapbook shows newspaper clippings about and images of her direct action at the polls where she attempted to cast a vote in numerous elections for decades. 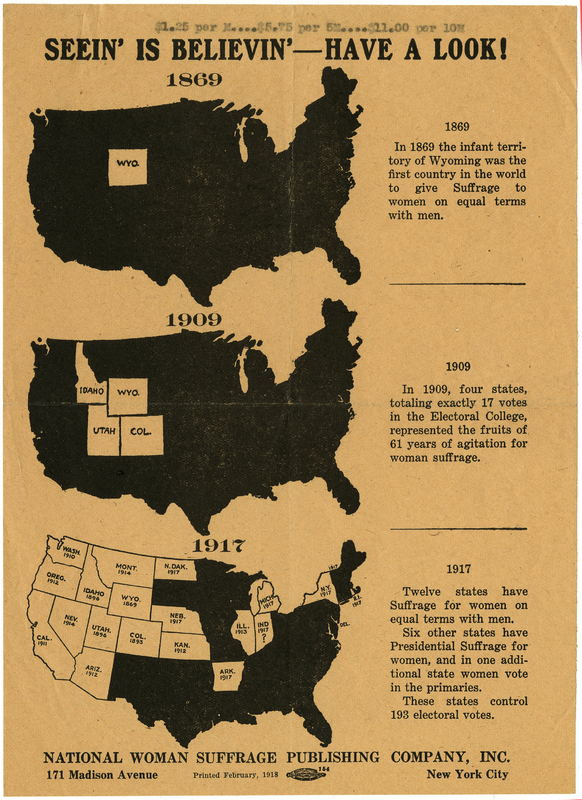 Seein' is Believin' - Have a look! Broadside